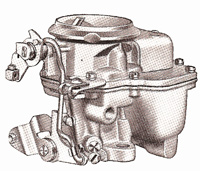 Carter AS from 1955-56 International Truck

The Carter AS carburetor was a small, single barrel downdraft carburetor that was used on 6 cylinder engines from 1952 to 1963 on AMC, Edsel, Ford, IHC, Mercury and Pontiac applications. It was only used in Pontiacs with the 261 CID engine, in 1961, in Canada.