The Rochester Varajet was a small, staged two barrel carburetor used from 1979 to 1987 in General Motors and AMC 4 and 6 cylinder applications.

The 2SE model was a standard, non-feedback carburetor produced from 1979 onwards. It was used in US production in cars only in the 1979 and 1980 model years. Canadian and export production used this model until 1987. 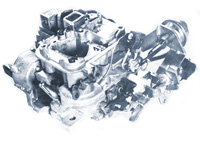 The E2SE was a feedback (computer-controlled) version. It is distinguished by the mixture control solenoid in the airhorn and the throttle position sensor in the side of the float bowl.