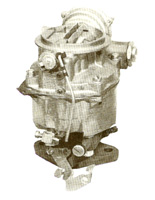 The Rochester Model B carburetor was used primarily on 4 and 6 cylinder General Motors products from 1950 to 1967. It was also sold as a service replacement for the 1932 and up Carter or Stromberg carburetors on Chevrolet engines.

The first design used a leather accelerator pump with a slotted stem (CK10 services these). These were used on Chevrolet cars up to 1956 and trucks to 1962.

The second design, from 1957 onwards in cars and 1963-up in trucks uses a round stem pump with a rubber cup.

Depending on the type of choke employed, the carbs were designated B, BC or BV. The plain model B was the manual choke version. BC carbs used a choke thermostat mounted on the side of the carburetor - attached to the air horn (top third). BV carburetors used a crossover choke where the choke coil is mounted on the manifold in a heat stove.

Detailed information on the various versions of the Model B carburetor is here.